Traditional confinement practices have a new mum’s wellbeing at heart

A new mother’s confinement period includes traditional postnatal practices that are designed to help her recover from pregnancy, labour and birth.

In Chinese culture, confinement (Zuo Yue Zi) is for the duration of one month, but can be up to 45 days for greater healing. During Zuo Yue Zi, the woman is not supposed to exert herself, so her mother or mother-in-law will often live with her to cook and clean.

The most common recommendation is the no bathing and no hair washing practice for the period following the baby’s birth. If you have heard of this practice and don’t wish to follow it, you could still clean your hair with a gauze-like material dipped in alcohol and wrapped around the comb. Or you could use a ‘dry shampoo’ which is available in most pharmacies. As for not showering, which is a challenge in tropical weather, you could opt to take warm sponge baths with ginger or neem leaves.

While showers and regular baths are not encouraged, specially made up herbal baths are a part of traditional confinement practices

Cold air or water is a big no-no during the traditional confinement period. These prohibitions are said to help ensure that your body retains as much heat as possible. It is believed this will help you avoid health problems such as rheumatism, arthritis, headaches and body pains later in life.

During the confinement period, new mums are encouraged to eat specially prepared meals with ‘warming’ ingredients such as ginger, black pepper, sesame oil and rice wine. These ingredients are believed to help with the healing process and help new mums regain their strength faster. A traditional Chinese confinement food practice includes fish soups, which are believed to boost low milk supply. You are also expected to avoid ‘cooling’ foods such as cold drinks, cucumber, cabbage and pineapple. Foods that cause ‘wind’ such as onions and jackfruit are also avoided during this period as they are believed to cause colic in your baby.

New mums are expected to rest during the confinement period. Ideally, they shouldn’t even have to deal with any cooking or household chores.

Massages are considered to be a good way to get your body back into great shape. This not only applies to the physical appearance of a new mum, but also helps to ensure internal wellbeing. Special ointments are used for massaging, after which your abdomen is tightly bound. A popular ingredient used among the Indian community in Singapore for massages is mustard seed oil. In the Malay community, a confinement practice is to hire a traditional masuese (bidan) who also binds the tummy with a special postnatal corset known as (bengkung)

Special tummy massage are popular during the confinement period

Popular among the Malay community, the practice of placing hot stones on a new mother’s tummy (menaikkan rahim) is believed to help remove impurities and cleanse the womb. Very experienced traditional masseuses usually do this, with techniques and stones carefully selected for the purpose.

It’s not called ‘confinement’ for nothing! New mums are not encouraged to leave the confines of their homes as it is believed the outside environment is filled with germs and other impurities.

You may be surprised to note that there are some exercises which new mums are encouraged to do during the confinement period. Some of these include pelvic and lower body tilts, leg slides, head, neck and shoulder raises. While many of these practices are quite traditional, they are not set in stone and many modern Asian families now choose which practices to follow or modify. Ultimately, confinement practices – whichever culture they belong to – are designed to enhance the health and wellbeing of new mothers

Do you know that an average baby will need 1057 nappy changes in the first 6 months? Get exclusive promotions and free diaper samples by joining the Huggies Club now!

"The information contained in this site is for informational purposes only and is not intended to be a substitute for professional medical advice, diagnosis or treatment. Always seek the advice of your doctor or other qualified healthcare provider with any questions you may have regarding a medical condition. You should never delay seeking medical advice, disregard medical advice or discontinue medical treatment because of information on this site. To the extent permitted by law, Kimberly-Clark excludes liability or responsibility for claims, errors or omissions on this site, and may amend material at any time without notice."

How to Prevent and Treat Diaper Rash

Your baby's skin is sensitive - especially on their bottom.  The combination of baby's tender skin and the warm, moist environment of a diapered bottom can lead to the unfortunate red, irritated bumpy

It’s funny how many parents start to obsess over everything their babies do, right down to what’s in their diaper. To be fair though, your baby’s poop can tell you a lot about their health, so it is useful to pay more attention to those dirty diapers.

Placing your baby on their tummy will help them build strength in the head, neck, shoulder and back muscles. Your baby needs these muscles to roll over, sit up, crawl and explore the world, so it’s important to make tummy time a part of your baby’s routine. 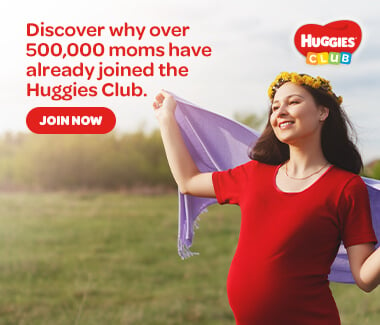 Preparation Guide for your Newborn

Mummies to-be, are you hearing not-so-great stories about breaking rest and a million diaper changes? It really isn’t that bad – if you are well prepared! So read up – here’s everything you need to know about preparing for junior.

There are a lot of misconceptions about breastfeeding that many new mothers may believe in. This may often result in a lower breastfeeding rate as more and more mothers switch to formula.

Return of Your Period

If you are fully breastfeeding, that is no supplementary feeds, it is likely you will not get your period until you have started to reduce the number of feeds your baby is having. This is not a rule and some women find their period returns quickly

The Benefits of Breastfeeding

Like every mother, we’re sure you’ll always make your decisions based on what’s best for your baby, even if it means having to face challenges.

Every sleep deprived parent’s holy grail is getting their baby to sleep through the night.

Mummies to-be, are you hearing not-so-great stories about breaking rest and a million diaper changes? It really isn’t that bad – if you are well prepared!.